I’m a bit of a weekend traveler. I like going places and doing things, even if it’s just something local. So this segment of Sarahndipity will be called Saradventures and will typically be featured on Mondays.

This weekend I traveled to Louisiana to visit my boyfriend’s brother, who plays baseball for a university in America’s Wetlands. 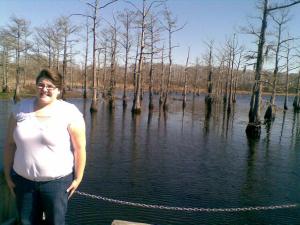 I’ve been to the state before. I went with a school group in 2005 just six weeks after hurricane Katrina hit New Orléans and helped with relief work. But to get there, we drove through the night. This time, I was able to see the bayou for its true beauty. I was just in awe of the random water sitting everywhere and the trees growing literally right up out of it. Telephone poles, billboards, and even houses sit right in the water like this is normal! The only time I’ve seen anything like it is during a Missouri flood. I absolutely love cool nature things like the bayou!

So we stopped at a nature preserve and took a nice little hike on Sunday afternoon on our way home. Now, I use a Dexcom Seven Plus continuous glucose monitor, and normally it’s pretty handy for catching rapid lows and highs. For example, right now it says 91 with an arrow diagonally downward, which means I should probably stop writing and test and eat something soon. But on Saturday night, I had rolled the sensor literally right out of my arm. Since it still had 2 days left on it, I hadn’t packed an extra. I don’t really consider it an “essential,” so based on my track record with losing things, I decided to leave the extras at home instead of risking breaking or losing the expensive sensors.

Now I was stuck on a hiking trail with no glucose and no Dexcom. It wasn’t that long of a trail, so I didn’t figure I would be in any dire emergency while hiking. Besides, I tested before we left, and was in the 140’s. But it’s never a safe assumption.

We decided to head towards the visitors center, in the opposite direction of the car, when I began to feel low. I didn’t want to send the boyfriend back to the car and be by myself, so I pushed myself to walk towards the car, holding onto his arm. I made it, but I was 42 when I got there. 42 is very rare for me. I have seen a few 4o’s since I started pumping, but they still seldom occur, especially with Dexcom.

So what was a sightseeing mission turned into a very scary hypo episode. Now, it’s not that diabetics can’t go hiking or do things like that. It’s that I made a poor decision to leave both my monitor and my fast acting sugar in the car when I knew I would be walking around for more than 20 minutes. It’s small decisions like these that can make or break living with diabetes. I was simply tired of carrying my very large purse around. Now, I need the large purse for all my supplies, but perhaps what I can do is place a smaller clutch in the bag and take that out when I want to leave the big purse.

Despite the scary lows and the lessons leanred, we had a lot of fun at the nature preserve. Though it was January I prefer the lack of greenery and the 60 degree weather to the humid Southern summers (Missouri gets humid enough!).   But, I’d love to go boating on a bayou sometime.